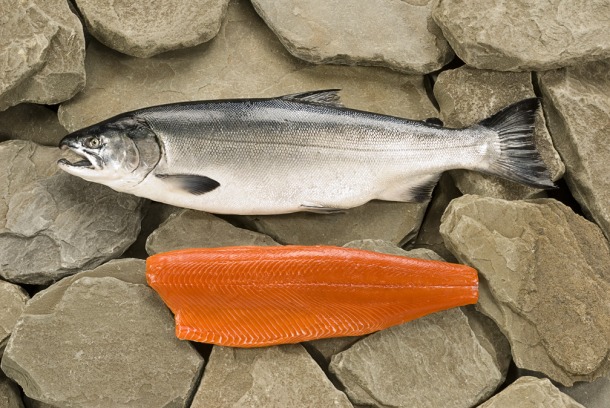 U.S. wild-caught coho salmon is a smart seafood choice because it is sustainably managed and responsibly harvested under U.S. regulations.

There are more than 20 different stocks of coho salmon.

Alaskan populations of coho salmon are near or above target population levels.

The status of coho populations in California and the Pacific Northwest varies.

As of 2018 many individual stocks are not overfished, but one is listed as endangered, and three are considered threatened under the Endangered Species Act (ESA).

Populations are affected by:

Changes in ocean and climatic conditions.

Removal and modification of dams that obstruct salmon migration.

While they are in the ocean, they have small black spots on their back and on the upper lobe of the tail.

The gumline in the lower jaw has lighter pigment than on Chinook salmon.

In fresh water, spawning coho are dark with reddish-maroon coloration on the sides.

Before juvenile coho migrate to the sea, they lose their parr marks (a pattern of vertical bars and spots useful for camouflage) and gain the dark back and light belly coloration of coho living in the ocean

Coho salmon are anadromous—they hatch in freshwater streams and spend a year in streams and rivers then migrate out to the saltwater environment of the ocean to feed and grow.

Some stocks of coho salmon migrate more than 1,000 miles in the ocean, while other stocks remain in marine areas close to the streams where they were born.

They spend about 1½ years feeding in the ocean, then return to their natal streams or rivers to spawn, generally in fall or early winter.

They typically spawn between the ages of 3 and 4.

Female coho dig out gravel nests (redds) on stream bottoms where they lay their eggs.

The eggs incubate for 6 to 7 weeks until they hatch.

All coho salmon die after spawning.

The newly hatched larvae remain in the gravel until the yolk sac is absorbed.

While in freshwater, young coho salmon feed on plankton and insects.

While in the ocean, they switch to a diet of small fishes such as herring, sand lance, anchovies, and sardines.

Adults are also known to eat juveniles of other salmon species, especially pink and chum salmon, as well as juvenile sablefish.

Otters, seals, and a variety of fish and birds prey on juvenile coho. Sharks, sea lions, seals, and orcas feed on adult coho.

After salmon spawn and die, salmon carcasses are a valuable source of energy and nutrients to the river ecosystem. Carcasses have been shown to improve newly hatched salmon growth and survival by contributing nitrogen and phosphorous compounds to streams

Wines Online for all Kinds of Liquor and Wine Tasting Needs